I’m writing this at a time of New Year’s Resolutions and renewed energy and enthusiasm within AFC Unity as we go forward with our “women’s football revolution” – which is reflected by our commitment to the community as well as our Football Philosophy which, within that, has meant developing a style of play that is finally giving us a footballing identity and a sense of ourselves as a football club: the way we play, why we do it, and how we do it.

Once we were hit by over half a dozen first team injuries at the start of the season – essentially dashing any hopes of finishing high in the Second Division – it would have been easy – in such a time of footballing “crisis” – to compromise this style of play to protect ourselves from heavier defeats, but to do that would have meant having to learn the playing style all over anyway after that challenging period was over, which would have presented its own problems too, of course: if you can commit yourself to a style of play when times are hard, conceding a few goals more in defeats that would have likely happened anyway, then you can play in that style like it’s second nature by the time the crisis is over, and really hit your stride, which is what I feel we’re about to do, even with (or thanks to) additions in the first team from the second team; additions that were somewhat inevitable but expedited given the gaps in the team due to injuries.

Obviously, the main talking point has been the creation of a second team this season and how that meant players were part of a smaller team. Naturally, that presented an immediate trial for us: previously unable to meet demand following only our second-ever season in football, we simply had to face the challenge of a first – and second – team of potentially slightly smaller numbers, and while although at one point we had about 21 registered players for the second team and 19 for the first, because turnout is smaller than with one team there is less competition for spots which can breed complacency, something we haven’t expected to be an issue in our positive environment, but is, to an extent, natural.

But it had to be done: while the first team are on the long hard road to footballing success in terms of their quality and increasing standards, the newly-formed AFC Unity Jets finally gave opportunities to players who hadn’t had much chance to get stuck in to 11-a-side action in a relaxed environment, and right away, right at the get-go, expressed excitement at this regardless of the turnout; a spirit so rare it won them a nomination for another Respect award. We’ll see if the demand we tried to meet sustains and remains evident, and assuming it is, we see the AFC Unity Jets as a key intermediate step for players to get 11-a-side games and, eventually, use the opportunity to grasp our style of play and formations which we want to be utilised at all levels, throughout the club, from beginner sessions and up through both teams.

Because we’re that rarity of being an independent women’s football club, many are used to women’s teams being an add-on to a men’s club and even used as a “cash cow” to open up access to funds that end up being spent on the men. But for us, the creation of the AFC Unity Jets was never about money. Our prices as a club are amongst the most competitive in the country, so often we break even, and as a non-profit organisation any proceeds we do make go right back into the club. In many cases, a second team can generate more money but also cost more money, so it makes little difference on finances. But because as a social enterprise it’s always about more than money, you have to consider the cost to resources and energies as well. Beyond financial rewards, return on investment means returns in terms of activity and contentment are really important, so it really matters that everyone involved – from players, to coaches, to co-founders – are getting a lot out of it. That’s our primary motivating factor.

So as with any expansion – including our Solidarity Soccer initiative – you have to avoid doing an infamous Starbucks error and see demand so chase it to the point of over-stretching yourself and risking “corporate cannibalization” – a business phenomenon where you offer so many options that each subtract from one another and put a drain on resources. You have to be careful to keep strong what you have and not dilute anything. Such dilution can come in the form of financial dilution, or the dilution of the activity so it risks going off-mission. With Solidarity Soccer, we’ve spotted the warning signs and made sure to emphasise quality over quantity, which might mean fewer sessions or a renewed dedication to an inclusive environment for beginners, where 11-a-side players instead heighten their role as ambassadors (some of the very best 11-a-side players came through our Solidarity Soccer initiative, so still love it!)

The Solidarity Soccer initiative, like the AFC Unity Jets, is also important because we want our football philosophy to become a trend not a fad, and ultimately the only way we can do that is by nurturing our own players from the ground up, which naturally will mean looking towards a junior set-up. Some grassroots coaches, like Martin Bidzinski, are trying to emphasise a different way of coaching football with players from an early age in this country, where instead of talking about “the second ball” all the time, we look at “the first ball,” and quality touches, and retention of possession. You have to set a foundational style of play for a team, or club, and then you can tinker with it or tweak it down the line, but first and foremost the fundamentals of it must be understood.

But ultimately, our own football philosophy, coaching approach, and playing style are all part of the same ethos as what we do away from the field, in the community: you’ll notice we use words like “collectivism,” “empowerment,” and “positivity” in any scenario, on or off the pitch. Despite our incredible retention rates, there have been one or two players who couldn’t understand our club, feeling like it just wasn’t for them, and saying things like, ‘the food bank stuff is nice, but I don’t buy into positivity,’ as though they’re separate things. They are one and the same! It’s all part of the same AFC Unity approach, and you can’t appreciate or embrace one and not the other. I never make a single coaching decision without asking myself, ‘Is this football a reflection of what we’re about as a club?’ 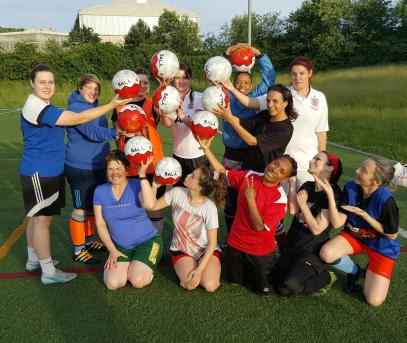 But in these post-Thatcherite neoliberal times of “Survival of the Fittest” (a principle far too many teams are based on), our ethos is sadly not for everyone. Other clubs and even governing bodies may be baffled by our approach where we run a tight ship and stamp out bullying behaviour or cliques – for so long a given in football – but we’ll keep doing it, because we have to be more than a welcome refuge for players that didn’t fit in elsewhere, but have to try and contribute to positive change in the sport itself. We’ve even been ridiculed by opposing teams for using fair trade footballs – which makes me assume they much prefer, say, a little child exploitation, sweatshop labour, or worker exploitation with their Sunday league football. How peculiar! These are, as John Lennon sang, strange days indeed.

Yes, Donald Trump is president-elect of the United States. Yes, Labour MPs are being assassinated on British streets by right-wing extremists. Yes, there’s a Brexit. Yes, it can seem like we live in cynical times. And yes, to use an example from AFC Unity, there are those who love seeing us lose, post jibes on social media, leave abusive comments below, and cheer on bigger, more established clubs that keep the order in place.

But some of the best people I’ve encountered have been through my very lucky position as AFC Unity’s manager and the majority of people – the really good, decent, positive people – are rooting for us. We really appreciate that. We know we’re doing something right. And we will keep going, with the spirit of positivity and integrity at the heart of every decision we make. It’s brought us this far, but it will take us even further, so we can do more good things both on and off the pitch. The year ahead may bring many changes and challenges, as always, but I have no doubt is going to continue to be absolutely amazing.