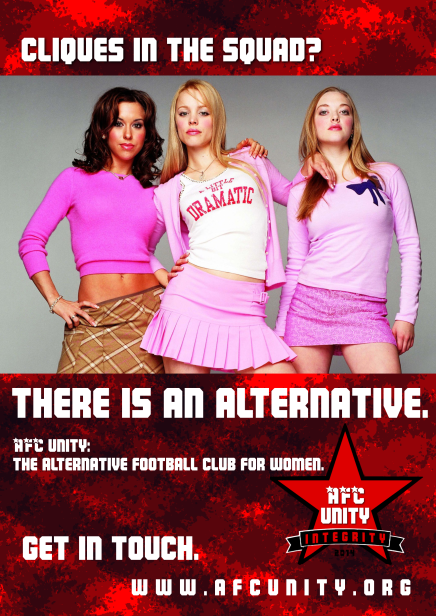 You may have noticed the launch of AFC Unity’s social media campaign, “There Is An Alternative,” as we look to raise awareness of our indie “alternative football club” for women in a grassroots sport dominated by men’s clubs and famous badges.

A slightly cheeky reference to Margaret Thatcher’s claim that ‘there is no alternative’ to the neoliberal economic approach that has, in fact, been an absolute disaster for society, this campaign specifically draws on our Football Philosophy to demonstrate that, through that, there is an alternative to traditional, more mainstream football where training sessions are run like an army camp in a culture of “survival of the fittest.”

We believe that in women’s football exists a desire for a more empowering approach to football that is warm, friendly, and thoughtful.

But as a stand-alone women’s club, it’s harder for AFC Unity to reach out to players with this ethos. We aren’t an add-on to an established men’s club, and we are not a famous brand. We’ve only been going for two and a half years, and even though in that time we have become a Charter Standard Club, enjoyed some good results, introduced a second team, raised an incredible amount of donations for local food banks, and even been given the FA’s Respect Award, we remain underdogs in grassroots football.

This is where we ask you to spread the word and share our “There Is An Alternative” imagery on your social media networks. The more we reach out to women who are tired of the same old football, the more we can engage more players and expand the club, and in turn do more good work.