AFC Unity experienced a rollercoaster first week in competitive action this week – winning one game 7-0, and losing another 7-0.

The first game was a 5-a-side against a group with an excellent ethos, Nunny’s Funky Boots, which has engaged many women from various backgrounds in local soccer action. Before moving to Crookes, they hosted AFC Unity with a warm welcome, in their last game at Springs Leisure Centre on a hot and humid Thursday evening with a rough, hard playing surface.

Despite the conditions, the AFC Unity women won 7-0, even though Nunny’s played incredibly well and were unlucky to get more from the game.

“We want to thank the Nunny’s group for their fabulous attitude and fair play,” said manager Jay Baker. “We hope to collaborate with them and support them in the future.” 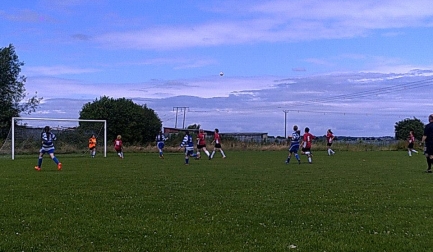 The first-ever 11-a-side game – at Hemsworth – was slightly different.

With a threadbare squad of 13 players to Hemsworth’s 17, the rolling substitutions were always going to play a part. Nonetheless, having never played together before, AFC Unity played well and held Hemsworth to just a 2-0 lead at half-time. After some tactical changes, the team came out fighting for the second half, and threatened to pull at least one goal back, until a penalty extended Hemsworth’s lead, and opened the floodgates that led to a 7-0 victory for the home team.

“Even Hemsworth admitted the scoreline flattered them,” said Jay Baker. “The penalty stopped our momentum a bit, too, and was the total turning point for that second half. Credit to Hemsworth; they’re an experienced, physical squad, and our players are still trying to gel, get to know each other well, and become accustomed to 90 minute matches with minimal substitutes in these early days. I’m proud of them, because they insisted on playing good football even at the expense of conceding goals. They never compromised, and never stopped battling. That’s the spirit we want to see.

“In the pre-season, the results don’t matter, whether 5-a-side or 11-a-side; it’s all a learning curve. We have an intelligent team with a good foundation, and as we improve, sticking to those principles will win games in the long run.”